As you know, the Supreme Court of the United States is likely to decide very soon, in Dobbs v. Jackson Women’s Health Organization, whether a Mississippi law banning abortions after fifteen weeks of pregnancy—i.e., well before fetal viability outside the womb—is constitutional.

The Dobbs case involves major constitutional questions regarding abortion rights and women’s rights. It also is about the scope of individual’s rights to bodily integrity and autonomy, including rights to decide freely to have sex or not and a person’s rights to use her/his/their natural bodily capacity to seek to reproduce or not.

These issues and their history will be discussed next Wednesday, June 1, 2022, at noon EDT, in a panel on “The Unknown History of Reproductive Rights & Eugenics: From Skinner to Roe.”

The panel will occur at Georgetown Law School, 600 New Jersey Avenue, NW, in Washington, D.C. The panel is co-sponsored by the Robert H. Jackson Center.

The panel participants will be: 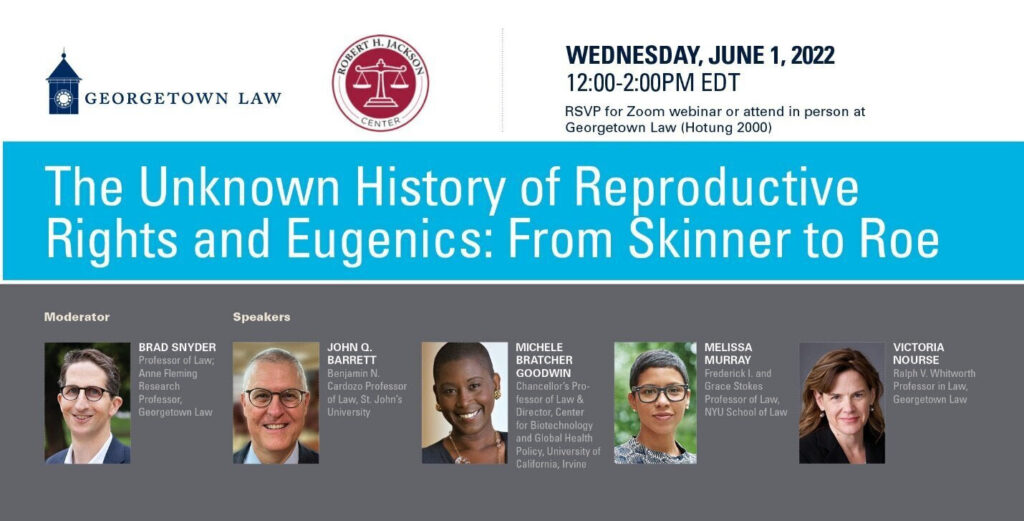 This event will be free and open to the public. It also will be streamed online.

Anyone who is interested in attending or watching needs to RSVP—

The occasion for this panel, in addition to the Supreme Court’s impending Dobbs decision, is that its date, June 1, 2022, will mark the 80th anniversary of the Court’s landmark decision in Skinner v. Oklahoma.

In Skinner, the Supreme Court unanimously declared unconstitutional an Oklahoma law that provided for the sterilization of “habitual criminals.” Jack Skinner, a state prison inmate, won a decision that protected his reproductive capability and autonomy. The decision became an important starting point for constitutional law doctrines that protect individuals from government regulations and penalties in the areas of contraception, abortion, private intimacy, and other fundamental rights.

When Skinner was argued and decided in 1942, Justice Robert H. Jackson was the Supreme Court’s junior justice—he had been appointed less than a year earlier. In the case, Justice Jackson wrote a concurring opinion that is textually compact and conceptually very large. (I will have more to say about that opinion on the panel next Wednesday.)

I and we look forward to seeing some, even many, of you at Georgetown Law School next Wednesday.