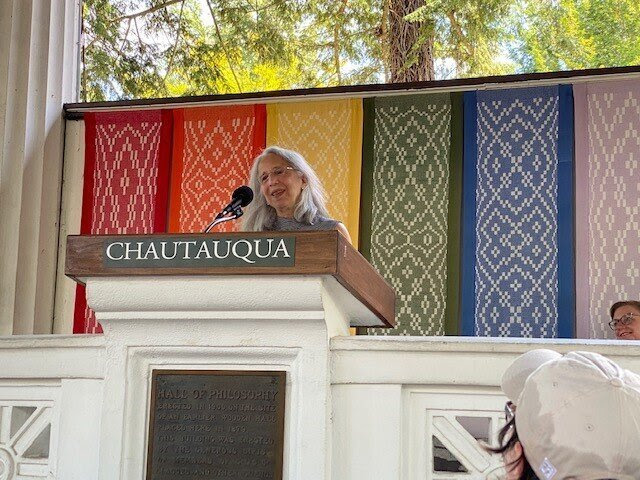 Professor Siegel also has posted a draft paper, “Memory Games: Dobbs’s Originalism As Anti-Democratic Living Constitutionalism—and Some Pathways for Resistance,” that will be published in the Texas Law Review.  To download and read the paper, click here:

Reva Siegel is the Nicholas deB. Katzenbach Professor of Law at Yale Law School. She teaches Constitutional Law, Reproductive Justice, and other courses. Her writing draws on legal history to explore questions of law and inequality and to analyze how courts interact with representative government and popular movements in interpreting the Constitution.

The annual Jackson Lecture at Chautauqua Institution is a leading expert’s consideration of the Supreme Court, its Justices, significant decisions, and related topics in the weeks following the Court’s start of its annual summer recess.

Chautauqua’s Jackson Lecturers have been:

And some final words on Chautauqua Institution—

It is where an attacker last week tried to kill writer Salman Rushdie just before he was to speak on the stage of Chautauqua’s Amphitheater.

That atrocity demonstrates in a tragic way that Chautauqua and all aspects of the peaceful assembly that it stands for are great but also fragile treasures. They were empowering resources in Robert H. Jackson’s own life. They have been that ever since, including in the Jackson Lectures, for so many of us.

We all need to know, value, and rededicate ourselves to nurturing the qualities of living and learning together in peace, at Chautauqua Institution and in all of our places.